An Investment in America's Future

To date, more than 20,000 students across North America have been provided college educations by the Horatio Alger Association.

In 2011, Glenn Stearns became the youngest Member ever honored with induction into the Horatio Alger Association of Distinguished Americans. The Award is given to individuals in recognition of overcoming challenging beginnings in life and then climbing to the top of their fields with outstanding endeavors in giving back to others. Members are a select group recognized for representing the ideals the American Dream, among them: Norman Vincent Peale, Billy Graham, Ronald Reagan, Oprah Winfrey, Buzz Aldrin, Colin Powell, Maya Angelou, T. Boone Pickens, Condoleezza Rice, and Hank Aaron.

In 2013, Glenn became the youngest member ever elected to the Association's prestigious Board of Directors.

The Horatio Alger Association of Distinguished Americans is 501(c)(3) non-profit educational organization dedicated to the simple but powerful belief that hard work, honesty, and determination can conquer all obstacles. Association Members personally fund annually over 9-million dollars in needs-based scholarships to thousands of American students who demonstrate strength in the face of adversity, using their extreme hardships as motivators for success. To date, more than 20,000 students across North America have been provided college educations by the Horatio Alger Association. Throughout the year, Members also mentor the Scholars and underscore with them the importance of service to others. 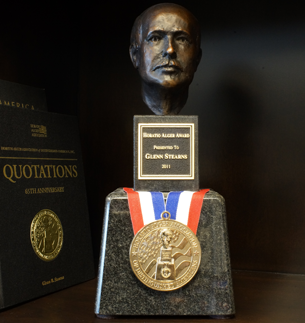 In the spring of 2013, Glenn and his wife Mindy asked select Horatio Alger Scholars to submit essays on the theme of "Surviving and Thriving" for an opportunity to attend the Stearns' first Scholar Mentoring Leadership retreat on Richard Branson's exclusive Necker Island. Themed "Surviving & Thriving," the retreat intention was to amplify the value of adversity in finding & living our "Purpose." Six scholars were selected for the gathering which also included leaders of industry and their spouses, as well as several world-renowned guest speakers: mountaineer and "Touching the Void" author Joe Simpson, Everest disaster survivor Dr. Beck Weathers, and American Vietnam POW Captain Charlie Plumb. Everyone attending shared their "survivor" stories including Richard Branson and Glenn. All bonded over the resilience of the human spirit, and left inspired with more clarity on living a full life with meaning and purpose.